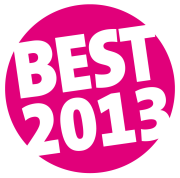 Do you agree with my picks? Disagree? Have your own favorites? Lemme know.

Matilda the Musical: Thanks to Tim Minchin’s cheeky lyrics, Matthew Warchus’ energetic and innovative staging, and the revolting children singing, dancing, jumping, and tumbling their way across the stage, this show was the high point of 2013 New York City musical theatre. (It should have won the Tony for Best Musical). The cast was also swell—Bertie Carvel (Tony nom), Gabriel Ebert (Tony Award), Lauren Ward (Tony nom), and Lesli Margherita. I’m hoping to see this one again if I can swing it.

Pippin: Helmed by Diane Paulus, one of the most talented directors working on Broadway today, this revival of the 1972 hit show does what art is supposed to do: it reenvisions something and takes it to another level entirely. That’s certainly what Paulus does in the show’s stunning first act. The opening number, “Magic to Do,” is a mind blower. There is so much marvelous business going on all at once that one doesn’t know where to look. Patina Miller is a goddess and Andrea Martin stops the show with her “No Time at All” (performed on a trapeze). Act 2? Not so amazing, but that’s OK. The show, Martin, and Miller deserved their Tonys

Cinderella: Technically the title of this show is “Rodgers + Hammerstein’s Cinderella.” I was reminded of the importance of those names above the title the moment the full orchestra started playing the overture. The music is so lush and gorgeous, and it’s of a quality and scope one doesn’t hear very often in today’s theatres. Here’s the other thing about this production: the stagecraft is absolultely magical. There are onstage costume changes where you literally cannot believe your eyes. And the original cast, Laura Osnes, Santino Fontana, Victoria Clark, and Harriet Harris—all Broadway pros—was pretty much perfect.

A Gentleman’s Guide to Love and Murder: An evening of nonstop delightful, manic musical mayhem, thanks in large measure to Jefferson Mays’s artful, indefatigable portrayal of 8 doomed members of the D’Ysquith family. Bryce Pinkham also shines as Monty, the lost D’Ysquith who sets out to eradicate the 8 family members standing between him and the throne of England. Can we love such a scoundrel who has “Poison in his Pocket?” Absolutely.

**Special Note** What’s that you say?  Did I accidentally leave Kinky Boots off the list? No accident, dear readers. Yes, the show had a couple of terrific numbers (Everybody Say Yeah and Raise You Up) but overall, the lyrics and music didn’t measure up, especially when compared with Tim Minchin’s really witty and terrific work in Matilda. And yes, Billy Porter did a fine job and the costumes were wonderful. But that’s about it. A disappointment. And it’s not on my list. But with all those Tonys, I’m sure it will survive.