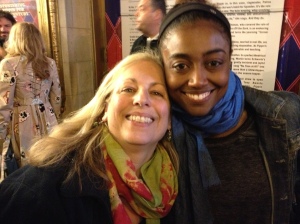 Tomorrow night, June 9,  is the night when everyone in the theatre community holds their collective breath to see who will earn the word “win” in his or her next Playbill bio and who will have to be content with “nom.”

There’s not much time left before the big night, so I’ve got to get my Tony predictions in NOW. Because time is short, I’ll only cover the main categories. Maybe I’ll be right, maybe I’ll be wrong, but to quote Ann Richards in Holland Taylor’s snappy production of Ann: “You gotta go out on a limb, because that’s where the fruit is.”

Best Musical:  Kinky Boots
I haven’t yet written my Shari on the Aisle review of Kinky Boots, but let’s just say that in the 2013 battle of Matilda vs. Boots, I’m firmly in the Matilda camp. Too bad for me, because everybody else prefers Kinky Boots. (But I’d love to be surprised).

Best Revival of a Musical: Pippin
No contest, although I saw and enjoyed all of the nominated shows in this category. Annie is a delightful show and this is a great production; Drood is tons of fun, and Cinderella’s stagecraft is stunning. But Pippin is a shoo-in.

Best Play: Vanya and Sonia and Masha and Spike
Christopher Durang has never won a Tony and this is his year. The Testament of Mary, a provocative play with an amazing performance by Fiona Shaw, has no chance. Even though the play won a nomination, when Tony voters skipped Shaw for a Best Actress nod, the play promptly posted a closing notice. The Assembled Parties and Lucky Guy garnered lots of praise, Parties for the actual play and Guy for Tom Hanks’ performance. But everyone loved Vanya etal., and it’s a pretty sure bet to win.

Best Revival of a Play: Who’s Afraid of Virginia Woolf
This is probably the toughest category to call, the one where I’m really do have to go out on a limb. My first instinct is to predict Golden Boy, a really top rate production that everyone loved. But it’s no longer playing, which works against it. Of course Virginia Woolf has also closed, but it’s considered the best production of the play in a long time, possibly ever. The performances were just sizzling. Orphans, which I enjoyed (especially Tom Sturridge’s feral performance), has no shot. I also loved every minute of Trip to Bountiful, but Tony voters will most likely honor Cicely Tyson, but not the play, which is OK by me.

Best Performance by an Actor in a Leading Role in a Play: Tom Hanks
Everybody loves both him personally and his performance. And although the play is no masterpiece, Tom is raking in the bucks for the production. Give the man a Tony.

Best Performance by an Actress in a Leading Role in a Play: Cicely Tyson
Kristine Nielsen, a theatre veteran and Durang favorite, is positively delicious in Vanya, etal. The producers tried to nominate her for best actress in a featured role, but the Tony committee (rightly) refused. Laurie Metcalf’s performance in her angst-ridden role in The Other Place was excellent, Amy Morton was fierce in Virginia Woolf, and Holland Taylor nailed the sass and wit of Ann Richards. But I will never forget the scene where the ethereal Ms. Tyson stood up, raised her arms to the heavens, and sang the hymn “Blessed Assurance.” The audience spontaneously joined in. It was a moment, let me tell you. She deserves that Tony and I can’t wait to see her accept it.

Almost done. On to the Best Performances by an Actor and Actress in a Leading Role in a Musical:

Best Performance by an Actor in a Leading Role in a Musical: Billy Porter
The Battle of the Cross-dressers. This one truly causes me pain. Bertie Carvel won the Olivier Award for his Miss Trunchbull in the original West End production of Matilda. I thought he was a shoo-in for this award, but all the buzz is about Billy Porter. He’s brilliantly talented, but I just adore Bertie. Surprise me, Tony voters.

Best Performance by an Actress in a Leading Role in a Musical: Patina Miller
I’m hearing rumors about Laura Osnes taking this one for her delightful turn in Cinderella. But seriously, Patina sings while on a trapeze. And her impeccable performance of the Fosse choreography in the Manson Trio number is just stellar. Plus, I’d give her an award for the buffest arms I’ve ever seen.

Before I sign off: While I’m writing about Pippin, I fully expect to see Andrea Martin accept her award for Best Performance by an Actress in a Featured Role in a Musical. I also predict she’ll bring down the house, as she does 8 times a week on stage at The Music Box. I’ve loved her since her days as Edith Prickly on SCTV. And she’s the hottest 67 year old anywhere.

I’ll be watching with Glenn, having a cocktail, eating leftovers, and keeping score tomorrow evening. Enjoy!