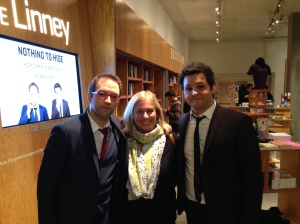 With the new fall season in full swing, there is so much to see and talk about. So in this post I’ll give a few “quickie” reviews of shows I’ve seen recently.

This excellent Old Vic production is a revival of a Terence Rattigan play that originally premiered on Broadway in 1947. It is based on a true story about a young boy who is expelled from his British military school for allegedly stealing a small sum of money from a classmate. He swears his innocence—and his father risks both his health and his family’s future to pursue a court case in his son’s defense. Is the father foolishly obsessed with a futile battle? Is the boy innocent or guilty? How far should one go in pursuit of justice? The play doesn’t necessarily answer these questions, but it is never less than riveting throughout its 2 hour and 40 minute run time.

Should you go? Absolutely. The cast, direction, sets, even the costumes, are all first rate. In less capable hands, the play could easily become trivial or tiresome, but this cast, especially Michael Cumpsty (Desmond Curry), Roger Rees (Arthur Winslow), and Alessandro Nivola (Sir Robert Morton) convey every nuance of the text through subtle facial expressions and vocal expertise. It really is “theatre” at its best. It’s listed on TDF and at the TKTS booth, so no excuse not to buy a ticket.

In a nutshell: This is one of our greatest American plays, and this is probably the best production we’re going to see for a long time. Tennessee Williams’ 4-character “memory play” is based on characters from his life: himself, his mother, and his mentally fragile sister Rose. It is a poetic and touching tale of unrealized dreams and unanswered prayers. It is always a privilege to see Cherry Jones, one of the most talented actresses of her generation, perform on stage. She shines, as expected, but it is Zachary Quinto (known to filmgoers as the new Spock) as Williams’ stand-in Tom, who leads the production into the sublime. His performance of Tom’s opening soliloquy, spoken in darkness at the edge of the stage, weaves a spell that lasts through the final curtain: “Yes, I have tricks in my pocket, I have things up my sleeve. But I am the opposite of a stage magician. He gives you illusion that has the appearance of truth. I give you truth in the pleasant disguise of illusion.”

The negative: I didn’t love some of the director’s staging decisions, specifically, Laura’s appearance and exit from inside the sofa (really) which distracted and detracted from the play’s magic, and the use of pantomime for some stage business. But given the beauty of the overall production, let’s not dwell on it.

Should you go? The question should be, “Can you go?” This is a tough ticket, and the Booth is a smallish theatre. The run has just been extended and tickets are sometimes available at the TKTS booth, so go for it. And if you’re the hearty type, snag a $30 standing room ticket, as I did. (You might even be able to grab a seat).

Here is magic of the more literal kind: sleight of hand. Do you have a spare 75 minutes and a need to escape the pre-Holiday madness that is creeping over NYC? Head on over to 42nd & 10th Avenue where the charming Helder Guimarães and Derek DelGaudio are amusing and amazing audiences with card tricks that go way beyond the ordinary. The 2-man show is brought to us and directed by Renaissance man Neal Patrick Harris, President of the Academy of Magical Arts in CA and—who knew? —a bona fide “magic geek”. The show comes to NYC from a record-breaking run at the Geffen Playhouse in Los Angeles.

These guys come with impressive bona fides: DelGaudio is a Los Angeles-based magician who consults for Walt Disney Imagineering and has been named Close-up Magician of the Year for 2012 and 2013. Guimarães, originally from Portugal and now also based in CA, became the youngest ever World Champion of Card magic in 2006 at the age of 23. They are both charming and adorable (see photo).

Using nothing more than decks of playing cards (and a sock monkey) these two masters of distraction and sleight of hand, with the audience as willing co-conspirators, provide a most pleasant diversion from workaday troubles. They’re working hard, but all you have to do is sit back, relax, and let them fool you.

Should you go? While this is no “important” night at the theatre (see above reviews), it is a well-done production and it’s a lot of fun. These two are pros. (And they come highly recommended by NPH). The show, which is at Signature, but is not a Signature production, has been extended through January 18. Tickets are available through Ticket Central.